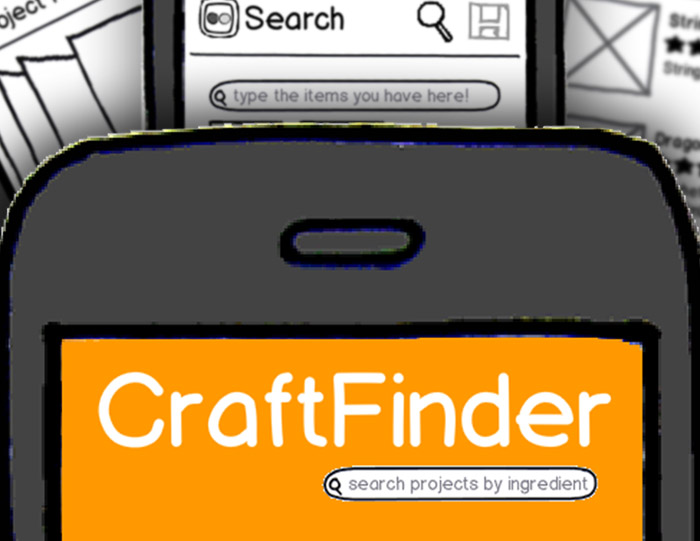 With the Internet, it’s easy to find cool, crafty DIY projects. But often we have to buy new items for one-off projects. Why not search for projects the way we search for recipes – using materials and items that we already have in the fridge or closet?

In this student project, we design and test the CraftFinder, a mobile recipe finder for DIY projects: you type in the stuff you have, and it will find and manage the projects that you can do with them.

Analogous to SuperCook! Except with CraftFinder, ingredients = item and recipes = projects. CraftFinder will search the entire web for DIY projects.

I identified my target users: 15 – 35 year-old students, professionals and parents who enjoy creative pursuits. Based on informal conversations with friends and family, I created several personas that embody these different users: Susan, the college student; Phillip and Monica, a couple with young children; and Ben, a young professional. Each persona forms the basis of a use case scenario.

…etcetera. But only because my professor wanted me to! In hindsight, this level of specificity would have been more useful at a later stage in the process. Half the initial features didn’t make it into the final design.

I created a quick paper prototype by printing out screens from Balsamiq and tried it out on a friend. I found that in addition to the search mechanism, the app should have a way to help you manage projects, so at first I tried a to-do list system. I straightened out some simple kinks, and convinced my classmate Jason Jacob to join me in developing this design further.

Using the storyboard, we created an interactive PowerPoint prototype. We did a quick round of usability testing on some college students. We asked them to think aloud as they completed a series of predetermined tasks based on the use case scenarios. The feedback we got showed that the items = ingredients analogy worked very well! The interface had an overly complicated navigation, however, and many users found themselves being lost in it despite the small number of screens.

We redesigned the way projects were managed by stripping away unnecessary screens and simplifying. We also tried using icons to provide feedback and indicate object states. Then we recruited people who more closely resemble our target users by going to Tufts University’s Craft Center on a busy weeknight.

During both rounds of evaluation, we had several sets of metrics with which to get a sense of our participant demographics and measure the quality of our prototypes. I’ll show some examples from the second round of testing.

Prior to the usability test, we asked participants to fill in a pre-interview questionnaire with the following questions:

During the test, we recorded the following metrics:

We also conducted a short post-interview questionnaire with the following questions, all of which were rated on a 7-point scale:

The interface still had some kinks. For example, we used a  tick icon to indicate that you have previously completed this saved project. This, however, unintentionally reminded some participants of email systems where ticks indicate selected items, awaiting some action to be applied en masse. We had assumed that whether or not a user has attempted a project before is important information, but future testing – preferably in a more ecological setting – should investigate whether this really is the case. If so, then additional capabilities such as sharing and rating projects can be investigated.

Lastly, we took a step back and asked, what if we went beyond the graphical user interface? Crafting is a tactile activity that gets you down and dirty, so a tangible user interface would dovetail nicely with the process. While you sort out your stuff and figure out what materials you have, why not be able to search for projects at the same time?

Inspired by the various tangible user interfaces presented in this paper and Google’s controversial  Project Glass, we came up with a storyboard that showed what might be. I drew the illustration below with pen and paper, and used Photoshop for putting it all together.

I did the first half of this project myself; the second half was done in collaboration with Jason Jacob.